In this community member profile, we would like to introduce Andy Fingerhut, Principal Engineer at Intel. Andy is an active contributor in the Open Networking Foundation’s P4 community. He currently lives and works in San Jose, California, and will soon be moving to the Research Triangle Park area of North Carolina. 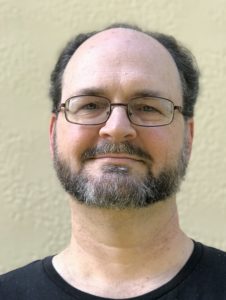 Andy has been involved in the P4 language community since 2017 and has since then served as a co-chair of the P4 Architecture Working Group with regular contributions and discussions with the P4 Language Design and API working groups.

Andy and his co-chair Calin Cascaval wrote well over half of P4’s Portable Switch Architecture specification after much discussion with, and help from, the working group members.  He hasn’t kept count, but has probably created over a hundred issues over the years in the open source P4 code repositories on GitHub. Some have been just questions, but often also bugs or clarifications in the language specification or its open source compiler and other related tools.

Since 2000, Andy worked at Cisco Systems and was a Principal Engineer for the last three years there. He recently left Cisco to take a job at Intel working directly with the teams at Barefoot Networks - a company Intel recently acquired.

Soon Andy is hoping to participate in a Portable NIC Architecture specification that has seen recent increase in industry interest and production of Smart NIC products.  Given his recent job change, he expects to be jumping in to the new role at Intel/Barefoot with both feet, and figuring out the best ways to make their products as useful as they can be.

“The P4 working groups have provided me with an opportunity to learn from and collaborate with the brightest minds in the computer networking area”, says Andy about working with ONF.

Regarding his hobbies, Andy often plays a variety of board games with friends, his wife, and one of his sons who regularly shows him better ways to play the games.  Everdell is a recent favorite in his family.  He has spent significant hobby time in a Lisp family programming language called Clojure that he really enjoys.  Andy also dabbles in learning about the history of science and philosophy, inspired by the enthusiasts of novelist Ayn Rand.  He is very gradually working his way towards reading every book by Robert Heinlein and Victor Hugo, and loves listening to music, where his recent favorites have been Sting, Peter Gabriel, and Mumford and Sons.

Editor Note: This post was originally written by Suresh Krishnan for Kaloom’s website. We are re-publishing it here (with permission) as it nicely outlines how Kaloom is using P4 in their securit