In this community member profile we highlight Jonathan DiLorenzo, a Software Engineer at Google Cloud, who is based in Sunnyvale, California. He has been an active contributor in the P4 and PINS communities since May 2021. 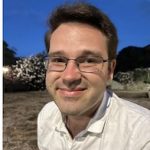 “Within the ONF communities I primarily work with P4Runtime,” said Jonathan. “ I have found community members are very thoughtful in their assessment of how any changes or new features may impact the full ecosystem and they are welcoming of both new ideas and new members.”

While at Cornell, Jonathan was Nate Foster’s only student who did not study networking. Thus, he finds his current role in networking especially amusing since he tried so hard to avoid it. However, the plethora of  interesting Programming Language challenges in networking drew him in.

At Google, Jonathan is part of the P4 Infra team and is working on automated black box testing using a P4 program as a model for correctness. This work was recently published as a SIGCOMM 2022 paper called SwitchV. In the open source world, Jonathan has contributed various improvements to the P4Runtime specification and will be following up with various pieces of the P4-based automated test framework. He finds most exciting his work on P4-Fuzzer, a tool for fuzzing control plane requests and validating control plane responses; and his work on automated dataplane testing based on a P4 model of the switch.

Beyond significant improvements to the P4-Fuzzer, and investment in open sourcing it, he spends much of his time working on integrated control plane and dataplane testing. In the short-term, all of these projects are in pursuit of improving Google’s PINS-based switch stack.

In his time away from work, Jonathan enjoys good food (both cooking and eating) and good wine with good friends. He adores his two young nieces (4 and 1.5 years old, respectively) and is a doting uncle. When he can make time for it, he can be seen playing solo video games and reading up a storm of free online novels.

What people rarely guess is that Jonathan is originally from Sweden  – until he rants about his (clearly superior) Swedish waffle maker and Swedish pancakes. Jonathan was also a fairly avid Shakespearean actor in college and a frequent Brad in productions of the Rocky Horror Picture Show (as well as most other characters at least once).