In this community member profile, we would like to introduce Noa Zilberman, an Associate Professor in the Department of Engineering Science at the University of Oxford, based in Oxford, United Kingdom. She is an active contributor in the Open Networking Foundation P4 Community and the recent recipient of the P4 Community Distinguished Service Award. 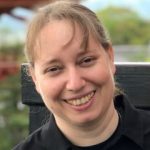 Noa joined the P4 community In 2015. Since then, she has contributed to multiple P4 projects, with a focus on in-network computing applications. The projects, which are all open source, explore the extent of P4 capabilities. These range from network services (e.g., DNS) and virtualization, through machine learning (classification) and consensus, to validation and hierarchical application design. Noa has also contributed to the P4->NetFPGA framework, enabling it to run P4 programs on the NetFPGA platform (NetFPGA is an open source platform for rapid prototyping of network devices). Noa has been co-chairing the P4 Education Workgroup, together with Professor Robert Soule (Yale University), since 2018. The workgroup has been driving community education efforts, including online materials, tutorials, hackathons, and EuroP4, the European P4 workshop (2018, 2019, and 2020).

Currently, Noa is excited by a new project brewing in the Education Workgroup - P4Pi - a low-cost, open source platform intended for teaching and research purposes. P4Pi (pronounced “papi”) runs on Raspberry Pi and uses the T4P4S compiler, with a DPDK-based software switch. According to Noa, cost has been a significant barrier to a wider adoption of P4 in academia. “While software solutions like BMv2 are great for some purposes, they lack realism and do not excite students like actual hardware,” she says, adding that “We want to make P4 accessible to students worldwide, as well as hobbyists.” As the popular Raspberry Pi platform has a price tag of less than an academic book (under $100), P4Pi aims to enable a large number of academic institutions to provide hands-on experience in networking education. The P4 Education Workgroup aims to provide both educators and practitioners the knowledge and tools required to use P4Pi in class and at home, including tutorials, sample code, tools, and community support. A P4Pi hackathon will run in August in ACM SIGCOMM’21, and thanks to a grant from the Network Programming Initiative, the organizers will be able to provide platforms to a few dozen participants.

Noa earned her BSc, MSc, and PhD in Electrical Engineering from Tel Aviv University, and she also holds an MA by resolution from the University of Oxford.

Her professional career started as a board design engineer in a start-up called Chromatis Networks, which built systems combining packet, cell, and TDM switching. It was acquired by Lucent and later closed. From there she moved to another start-up called Dune Networks, a fabless company designing high-end network devices. It was acquired in 2009 by Broadcom, and its chipset is now known as StrataDNX. Noa worked there for about 12 years in several roles, including as the manager of the hardware department, and as a chip architect. Her last project at Broadcom was the Jericho chip architecture.

About 8 years ago, she moved to academia and joined the NetFPGA team at the University of Cambridge. During her time there she worked on platforms, frameworks, and applications for programmable network devices. Beyond NetFPGA, most of her time was dedicated to the research of new solutions to scalable and sustainable computing and communications infrastructure, an area she is still actively researching at Oxford.

“Combining P4 with switch-architecture knowledge really makes a difference,“ says Noa. “It allows us to think outside the box, and use programmable switches to do more than they were designed to. It’s inspiring to work with students that come up with crazy project ideas, because they don’t assume a switch has a set functionality, and then find solutions that make it happen.”

As to her super-powers, Noa likes using pop-culture analogies to explain her research. She used balloons to describe her masters’ research, the NFL to explain her PhD thesis, and Game of Thrones to demonstrate the NetFPGA. She is still trying to find a good analogy for in-network computing.

ONF is pleased to announce the release of VOLTHA™ v2.8 along with an updated ONOS® release (v2.5.8). This is the first Long Term Support (LTS) release for VOLTHA.

ONF is pleased to announce the release of Stratum: 2021-06-30 release (or 21.06 for short). This release includes many new features plus bug fixes for Stratum’s Intel® Tofino™ target, plus