In this community member profile, we would like to introduce Ivan Eroshkin, a PhD candidate at the Czech Technical University in Prague, Czech Republic. His research topic is “Optimization Methods for Real-time Embedded Device Applications.” Ivan is currently interning with the Open Networking Foundation, contributing to SD-RAN, ODTN, and ONOS projects. 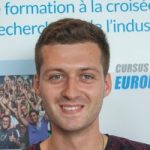 Originally from Ufa, Russia, Ivan moved to Prague after graduating high school at the age of 18. He received his B.S. degree at Czech Technical University (CTU) specializing in telecommunications. He continued his studies and received his M.S. degree at EURECOM, Sophia Antipolis, France, where he studied within the double-degree program between CTU and EURECOM.

Ivan’s technical background is mainly in the field of telecommunications. During his bachelor and master’s studies he worked part-time to gain as much practical telecom experience as he could. He was a technical support engineer in 2N Telecommunication, an embedded device programmer in Develict Solutions, an optical network planner in the Czech Telecommunications Infrastructure (CETIN). His master thesis was supported by the internship in Nokia Bell Labs Paris, where he worked on SDN control platform for optical transport networks using ONOS. While there, Ivan met Andrea Campanella, Member of Technical Staff at ONF, which led him to join ONF as part of a six-month internship program. Parts from his master thesis work related to updating the ODTN driver in ONOS classic for Nokia’s devices contributed to the ODTN project at ONF. After finishing his masters degree in both CTU and EURECOM, he enrolled in the PhD program at CTU in Prague.

Since October 2020, Ivan is interning with ONF again as part of the SD-RAN team. Under the mentorship of Sean Condon, Member of Technical Staff at ONF, he contributes to the SD-RAN project, where he takes care of implementing various Service Models as Go plugins (onos-e2-sm repo) and handling southbound protocol of E2T (onos-e2t repo). The specifics of these contributions are wrapping C-code into a Go-code (with CGo). At the same time he developed a tool, protoc-gen-cgo, a plugin for Protobuf compiler, which partially automates CGo code generation (some tweaks by hand are still needed, but a huge amount of time is saved).

“It has been a great experience working with the ONF community. A lot of stuff is well documented and it gave me good input to step off and start digging inside my specific work topics,” says Ivan about working with ONF. “Also, a huge support (including debugging sessions) from Andrea Campanella stays in my mind during the work on ODTN. With ONF, this experience reached the next level. I’m getting a lot of support from my mentor and my teammates. It’s not possible to not progress when you have such high-quality engineers and a wise leader surrounding you.”

As far as interests outside of work, Ivan loves indoor climbing (indoor ferrata), hiking, and domestic traveling. He used to play guitar, but since he doesn’t have much spare time these days, he has abandoned it for the time being, planning to pick it up again during retirement (which is oh still so far away for him). Ivan used to play football (European one – okay, soccer) in the amateur league of Prague. His other interests include continuous self-education  on various topics like how does a human body work, how does the brain work, how do certain industries work, and so on. Ivan also finished a school of art, but says his drawing skills still need a lot of improvement.

Ivan’s fun facts and super-skills include being a huge Red Hot Chili Peppers fan; having slept for two weeks on a couch in Paris since he only had 3 days advance notice of his internship start there; lived for one year in the French Riviera; and assembled a PC tower from the components purchased on Aliexpress and developing SW (also for ONF!) on this special machine.

This blog was previously published in the SIDN Labs blog on May 25, 2021.