In this community member profile, we would like to introduce Karthik Sethuraman, Principal Software Architect at NEC Corporation of America, based in Ashburn, Virginia, USA. He is an active contributor in the Open Networking Foundation OTCC community. 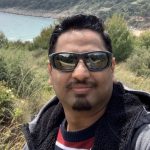 Karthik has been active in the SDN field since its early days (2012-2013) and as a co-editor of ONF’s Openflow optical extensions was actively involved in the standardization of this technology. He is currently co-leading ONF’s Transport API (TAPI) project that he conceptualized, launched, and shaped, since before APIs were a buzzword in this industry. He is a Technical Steering Team (TST) member of ONF’s Open Transport Configuration and Control (OTCC) and Open Information Model and Tools (OIMT) projects. Karthik is also a co-chair of MEF Lifecycle Services Orchestration (LSO) committee and leads the MEF LSO API standards development. This work is focused on developing B2B, B2C, and Service Orchestration interfaces.

Karthik’s latest involvement with ONF is in the SD-RAN project. As a member of the 5G/Beyond-5G technology strategy team, Karthik is working on OpenRAN systems and architecture. He is also part of a Service Provider Solutions Division where he is involved in setting direction for Service Management and Orchestration (SMO) and SDN Control systems.

As an early SDN adopter, he introduced and evangelized SDN principles for transport network control, both internally within NEC and in the network management systems and control community. He was instrumental in research and development of the network control systems software within the NEC group of companies. In his previous life as a senior J2EE software developer, he has extensive experience in architecting, designing, and hands-on coding of distributed control systems and network management software systems and in applying software development lifecycle processes and best practices. Karthik started his career as Staff Scientist at C-DAC (formerly NCST), India, working in AI research focused on stochastic neuro-fuzzy systems.

When asked about how it is to work within the ONF communities, Karthik says that “It is fantastic and I love the informal interactions and open collaboration style.”

Karthik is an amatuer astronomer, robotics enthusiast, and a proud coach of his daughter’s robotics team that received the prestigious “Excellence” award at the 2021 VEX Robotics World Championship. He also loves to bike and hike on weekends.

This is the second part of a two part blog about one of ONF’s newest projects in software defined networking: SD-Fabric. The first blog covers the background and accomplishments to date; this

This is part one of a two part blog about our Aether project, the first open source private 5G connected cloud platform for enterprises. This blog will give you a great overview of the current stat