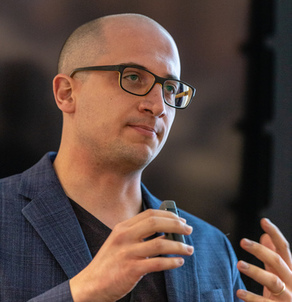 Nik Sultana About the author

The Flightplan project envisages the next generation of dataplane programming tools. It introduces the Dataplane Disaggregation problem—splitting up dataplane programs into program pieces that are mapped to run on different, possibly heterogeneous, network-connected hardware. The choice of splits and hardware is done to optimize network and application objectives beyond what could be achieved than if the original, monolithic program were mapped to a single dataplane target. The project also provides a design to solve this problem and evaluates a prototype implementation for P4 programs.

Figure 1: There are three main stages when deploying Flightplanned programs: (1) Splitting the program’s logic, (2) Mapping to hardware according to the needs of each split and its contribution to system-level objectives, (3) Configuring, starting and monitoring the distributed dataplane program. The original dataplane program is disaggregated across several physical dataplane targets.

Under current tooling, dataplane programs are mapped to single dataplane targets, one-to-one. This has the undesirable consequence of coupling a program with the kind of target it can run on: all of the resources or features needed by the program must be provided by the single target that it’s mapped to. This is undesirable because it burdens programmers with concerns beyond the program they are writing, requiring them to be aware of where the program will be executed. Even if we assume that the programmer knows about the deployment setting, what if the entire program cannot be mapped to a desired target, such as a switch ASIC, because of the target’s restricted computational abilities? Opting for a more expressive target, such as a CPU, might not be possible because of the loosened bandwidth and latency expectations that would entail. The one-to-one mapping places undesirable constraints on dataplane programs and their programmers.

By disaggregating the dataplane program we can run programs that cannot run entirely on a single target, or cannot run at the desired performance. Disaggregation turns the program into a distributed system that uses a range of possibly-heterogeneous dataplane targets—including those offering more computability and those offering more performance. But how do we go about it?

Why Dataplane Disaggregation is difficult

A programmer could manually adapt a dataplane program to have parts of it run on suitable hardware, but this is laborious and error-prone. This is made more difficult by the range of splits and mappings that the programmer would need to explore. This exploration is needed to determine whether disaggregation can help meet objectives, and which disaggregation to use.

The programmer would need to reason about: the P4 program’s resource needs, resources made available by different targets, typical workloads to which the program would be applied on those hardware targets, and how all of these affect system-level objectives such as bounds on throughput and power use. Since they’re deriving a distributed system, the programmer also needs to reason about combinations of partial and transient failures that can arise. Moreover this effort must be redone if the available hardware changes. And as we saw earlier, it burdens the programmer with knowing about the specifics of target hardware. The Flightplan paper characterises Dataplane Disaggregation in more detail based on a detailed example in the form of Crosspod.p4.

Dataplane Disaggregation is made difficult by the reasoning it entails—involving diverse information and several possible choices. But it seems to be the type of “difficult” that can be mitigated by support from suitable tooling. This tooling would reduce programmer burden by automating some of that reasoning and choice-exploration. And by exploring a range of deployment options, it would loosen the coupling between development-time and operations-time concerns and relax the need for programmers to have precise knowledge of deployment hardware and its loading.

How does Flightplan work?

Flightplan provides a solution to the Dataplane Disaggregation problem. Ultimately after using Flightplan the user will end up with a set of P4 programs, one for each target dataplane, each of which can be put through vendors’ toolchains to program their hardware under the current one-to-one tooling.

Using these tools you start with an annotated monolithic P4 program, such as that shown above (Figure 2). The monolithic program is reduced to rules that the planner will use in its analysis. This reduction is done automatically (example output) by the code analyser—P4 programmers don’t have to write rules. The planner ingests these rules together with a device description, topology description, a profile of resources, and system-level objectives—these are provided by the “operations” side of the organisation, without needing to involve the programmer. From these, Flightplan produces plans that descibe an allocation model (example) and a possibly-coarsened segmentation (example). The program is split according to this segmentation to produce one P4 program for each target dataplane. These can then be compiled and deployed using the current one-to-one paradigm.

Won’t Dataplane Disaggregation incur latency?
It depends: everything else being equal, adding extra dataplane hops would increase latency, but because of hetereogeneous hardware (and low-latency targets in particular) and workload distributions you can actually see a lowering of latency. This can be seen for Memcached GETs in the graph below (Figure 3). The graph shows the measurement response to the incremental activation of parts of a disaggregated program and adding external loss to simulate corruption. The Flightplan paper contains much more evaluation detail. Figure 3: Measurements over disaggregated Crosspod.p4, appearing in the Flightplan paper’s Figure 10 which details the graph’s layout and contents. In outline, the graph shows the incremental activation of parts of the distributed program and how this affects system behaviour and measurements.

Won’t Dataplane Disaggregation incur network overhead?
This depends on segmentation and workload. In the case where the workload exercises several parts of the distributed system, you incur network overhead for two reasons: i) intermediate (cross-dataplane) traffic being put on the network, and ii) metadata overhead of the computation’s context (e.g., variables’ values synchronized across dataplanes). The Flightplan prototype provides different runtime and tuning options, and the paper provides a detailed analysis of overhead. Even if this kind of overhead cannot be eliminated in all cases, it can be tuned to obtain a finer trade-off between disaggregation benefits against overhead.

How do I start a Flightplan-disaggregated program?
Use fpctl—the control program (code)—to configure, start and stop the system. It can also be used for property testing during routine checks or diagnosis.

What if part of the distributed program becomes unresponsive?
Flightplan’s runtime support allows you to configure detection, tolerance, and action to take, in both the data- and control-plane.

In addition to the prototype’s code and example programs, the repo contains a host of other reusable systems such as our experiment and measurement setup, and our network config generator. All of this is provided under a permissive license and can be cannibalised to support your research or products.

The Flightplan site links to several resources that can help understand how the system and its components work. These resources include our online demo, paper and accompanying short video.

Introduction Aether has been rapidly evolving since launch of the pilot network in late 2019. This initial network was a simple platform consisting of just two clusters, one in the cloud and the ot

In this community member profile, we would like to introduce David Bainbridge, Senior Director, Software Engineering at Ciena, based in San Jose, California, USA. He is an active contributor in the