Junwei Zhang About the author

Tencent Gateway (TGW) is the first access point for Internet traffic going over the Tencent network, which consolidates multiple applications: elastic IP (EIP), Cloud Load Balancer (CLB) etc. EIP is the gateway between Tencent’s Virtual Private Cloud (VPC) and the public network. Along with the continued growth of Tencent's service, EIP faces more and more challenges. CLB is a secure and fast traffic distribution service. Inbound traffic can be automatically distributed to multiple Cloud Virtual Machine (CVM) instances in the cloud via CLB.

Tencent’s original solution for EIP was a x86-based server cluster. Figure 1 below shows the topology. EIP gateways work as internal and external traffic converters and are logically located between the Tencent IDC and the public network. 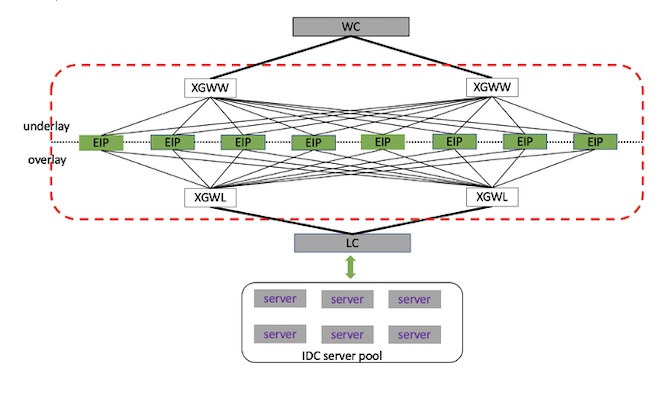 EIP is a stateless gateway. Tencent designed its EIP solution with two considerations:

With the continuous growth in traffic, the business processing capability of the existing framework in some scenarios has encountered relatively big challenges. Rate limit and single-core performance are two most standout things.

The traffic of each EIP is evenly distributed to multiple servers through ECMP, and each server is evenly distributed to multiple CPU cores through RSS for processing. The challenge is how to adjust the multiple CPUs of multiple servers in time according to the traffic changes. The shorter the time interval for adjustment, the easier and more precise is flow control. But as the load capacity of each cluster increases, the number of EIPs, the number of servers, and the number of CPUs will increase. For example, in a scenario where 20W EIPs are used on 8 servers and each server has 40 CPU cores, it is almost impossible to achieve 100ms granularity of traffic adjustment.

To address the problems described above, after investigating various solutions, Tencent selected to adopt the P4 switch as the device to support EIP. The P4 programmable switch brings significant benefits in terms of cost and performance. 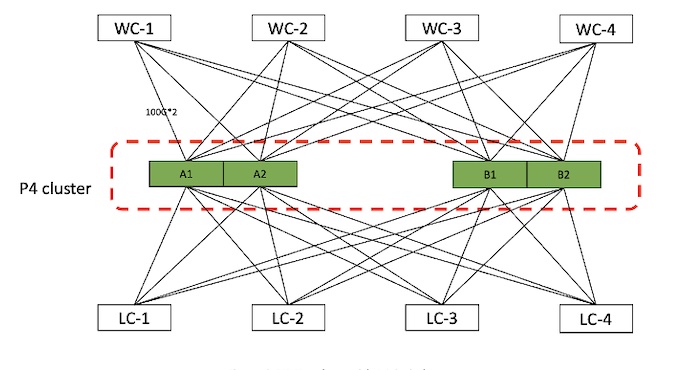 Compared with the X86 cluster gateway device, the architecture of the P4 programmable switch gateway is relatively simple. The main differences are:

The P4 programmable switch gateway, directly connected to the core of the internal and external networks, replaces the position of the TOR switch, reduces the network level, reduces the network complexity, and saves the construction cost. Under the same specifications, the machine cost can be reduced by half. At the same time, the scalability and disaster recovery capabilities of the original X86 cluster are retained. The specific cluster capacity can be expanded on demand according to business and disaster recovery requirements. Two or more units can be used to set up a cluster.

We divide the gateway function into two major levels, the control plane and the data plane. The control plane is responsible for the configuration management and state transition of services on the switch, generates and maintains data forwarding rules, and focuses on flexibility and scalability. The data plane transforms and filters specific packets according to the rules issued by the control plane, focusing on the function and performance of packet processing.

Part of the control plane of Region EIP is deployed centrally, and the other part is distributed on each device. After receiving the business requests issued by the product cluster management and control system, these requests are converted into a set of entries and commands on the P4 switching chip and sent to the Tofino. At the same time, they are also actively or passively collected and summarized according to the requirements of the control system, convert the statistical information on the device (such as EIP traffic, port status, resource utilization, etc.) to the specified service for processing, like monitoring, billing, etc. The whole logic is shown in figure 3 shown below, as shown in the gray block diagram. 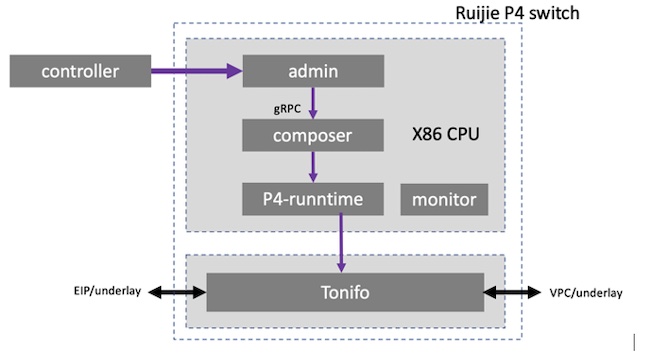 From the perspective of business usage, we divide the traffic of the switch into four categories： 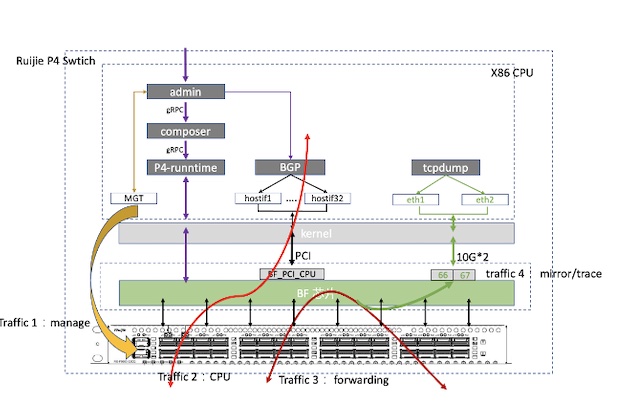 The platform switch module is relatively loose with the business, and can be reused by other gateway devices in the future. This part of the function includes packet mirroring, CPU packet processing, etc. Taking CPU processing as an example, it forward the packets coming from the CPU to Tofino. In reverse, it classifies and filters the packets received in Tofino, identifies packets to the CPU, and forwards them to the CPU port. This part of the function is abstracted into code common to multiple businesses, shared by multiple products.

In the whole process, each message has a predefined metadata information, which is used to cache query results, such as output port index number, GRE message field, etc. Finally, the tunnel module will encapsulate the outer GRE header according to the metadata and send. Sometimes abnormal packets or configuration errors cause packet search failure or packet loss when the rate exceeds the limit. Various types of exceptions will be counted before the discard policy is applied.

We also encountered some design limitations of Tofino itself.

In this community member profile, we would like to introduce Andrea Campanella, a Cloud Software Development Engineer at Intel who is based in Milan, Italy. He has been an active contributor in the