TAPI is a RESTCONF YANG interface for application between SDN controllers, orchestrators, traditional management systems and OSS solutions (see TAPI Overview and section 8 of TR-547 v2.0 for definitions and abbreviations).

The combination of the above features along with other enhancements and existing capabilities makes TAPI the right choice for Photonic, OTN and Ethernet control integration.

Read on for Testimonial Quotes more details on TAPI in general and on the TAPI v2.4.0 features.

“The ONF Transport API (TAPI) release 2.4 means a significant step forward into the path of openness and disaggregation of the Optical Transport Networks promoted and pursued by the Telecom Infra Project (TIP's) MUST operator’s subgroup, including Telefónica, Vodafone, Orange, MTN, Telia Company and Colt Technologies among other partners. This new TAPI release, which has been contributed by some of the MUST active operator participants, successfully accommodates several MUST-defined use cases for optical transport such as the physical Impairment data retrieval for OTSi path planning and validation," said Oscar González de Dios, Technical Lead at Telefónica and Johan Hjortås, Head of IP, Optical & Fixed Access Network strategy and architecture at Telia Company, co-chairs of the Open Optical and Packet Transport program at Telecom Infra Project.

“TAPI has been of significant importance to the OIF given the need for a standardized interface between SDN applications and SDN networks.  The extension supporting optical link information is especially important given the shift away from digital switching to optical switching and the advent of disaggregated systems.  And the addition of streaming notifications assists an application with learning real-time changes to the state of the network.  The OIF has enjoyed working with ONF to validate these interfaces and their applicability to service provider networks,” said Jonathan Sadler (Infinera), Chair, OIF Networking Interop WG.

“CTTC has participated in sixteen research projects addressing packet-optical transport networks for 5G and 6G, within the framework or the European 5GPPP and SNS work programmes. CTTC has been a long-term contributor to TAPI since its inception, based on the COP protocol defined in the FP7 STRAUSS project, and we continue to develop and test TAPI as an open and standard northbound Interface for disaggregated transport networks.  Currently, we use TAPI in several research projects such as Int5Gent, TeraFlow or B5G-OPEN,” said Raul Muñoz, head of the Packet Optical Networks and Services Research Unit at CTTC.

“Network Infrastructure automation is at stake for telco to improve our operational efficiency. In this respect, open and interoperable models such as ONF Transport API (TAPI)  are cornerstones. Orange is actively contributing to the standardization efforts and initiatives. Features introduced in this new release of TAPI, including impairment awareness, are an important step to support our use cases and short-term requirements. In this regard, we will continue to work on the functional and model convergence of standards, to cover the whole optical domain,” said M. Gilles Bourdon, Vice President, Wireline Networks and Infrastructure at Orange

“As Virgin Media O2 expands its Network Automation capabilities, understanding the network topology, connectivity, and services across a multi-vendor, multi-service network would have been significantly more complex had it not been for vendor alignment to TAPI. We are looking forward to utilising the new capabilities of TAPI v2.4.0, particularly the OAM, Alarm and PM enhancements to underpin our existing developments,” said  Martin Singer, CEng | Senior Manager, Network OSS Architecture at Virgin Media O2.

TAPI is a RESTCONF YANG interface appropriate for use between SDN controllers and orchestrators as shown below.

The above allows a TAPI client to gain and maintain alignment, via an ongoing flow of state updates, with the network controlled by the TAPI provider for all relevant network properties.

TAPI v2.4.0 includes two Reference Implementation Agreements that specify the application of the TAPI models for various use cases:

Intense work has been carried out to ensure alignment with ongoing IETF CCAMP models as well as existing practice such as GNPy. This has led to extensive additions to properties and improvements to structures in the photonic-media augments. Key use cases and application of the impairments model are detailed in TR-547 v2.0. 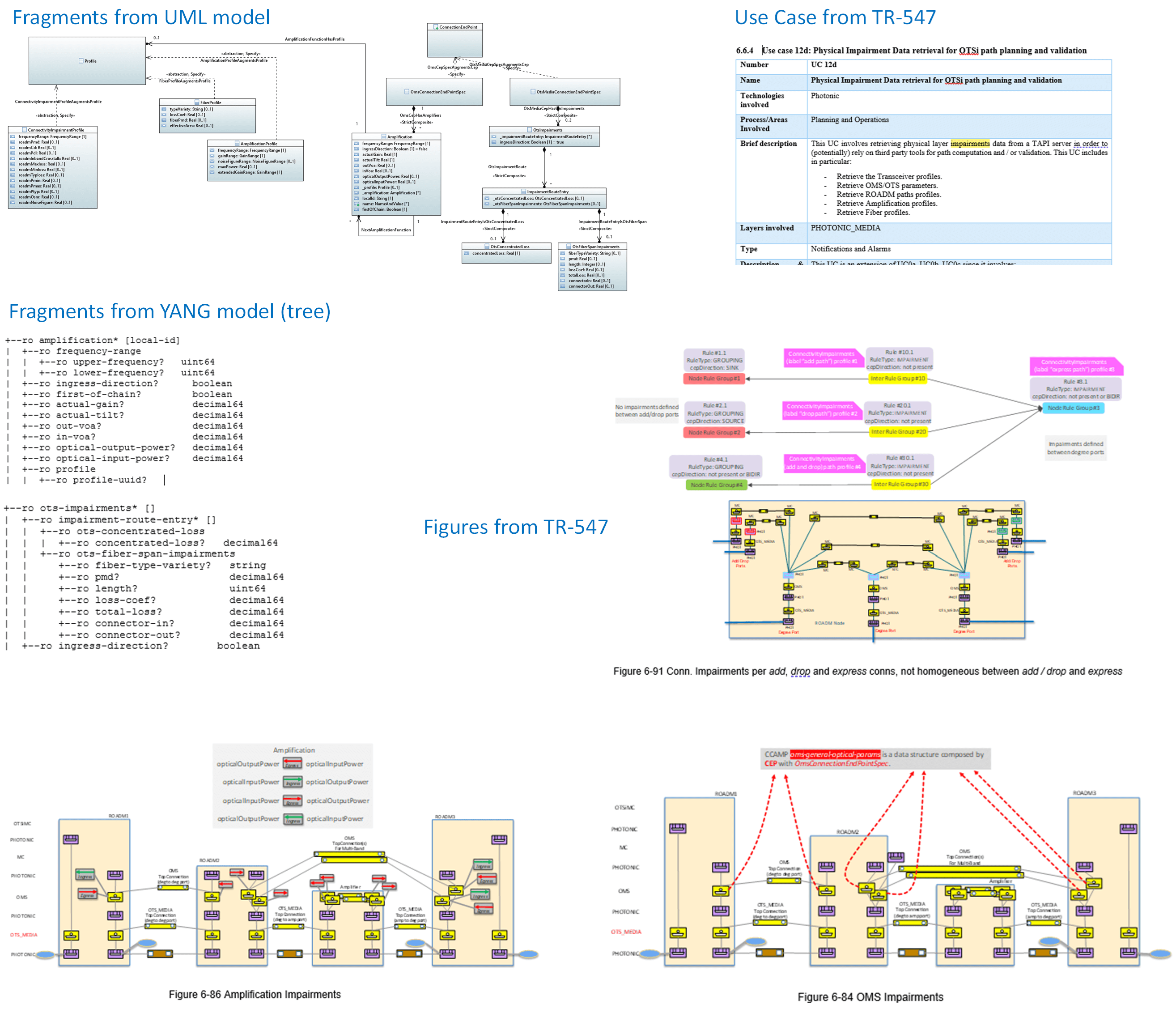 The layer model has been refined to better reflect key network structure, improve navigation and enable support for complex cases (including networks with regeneration). 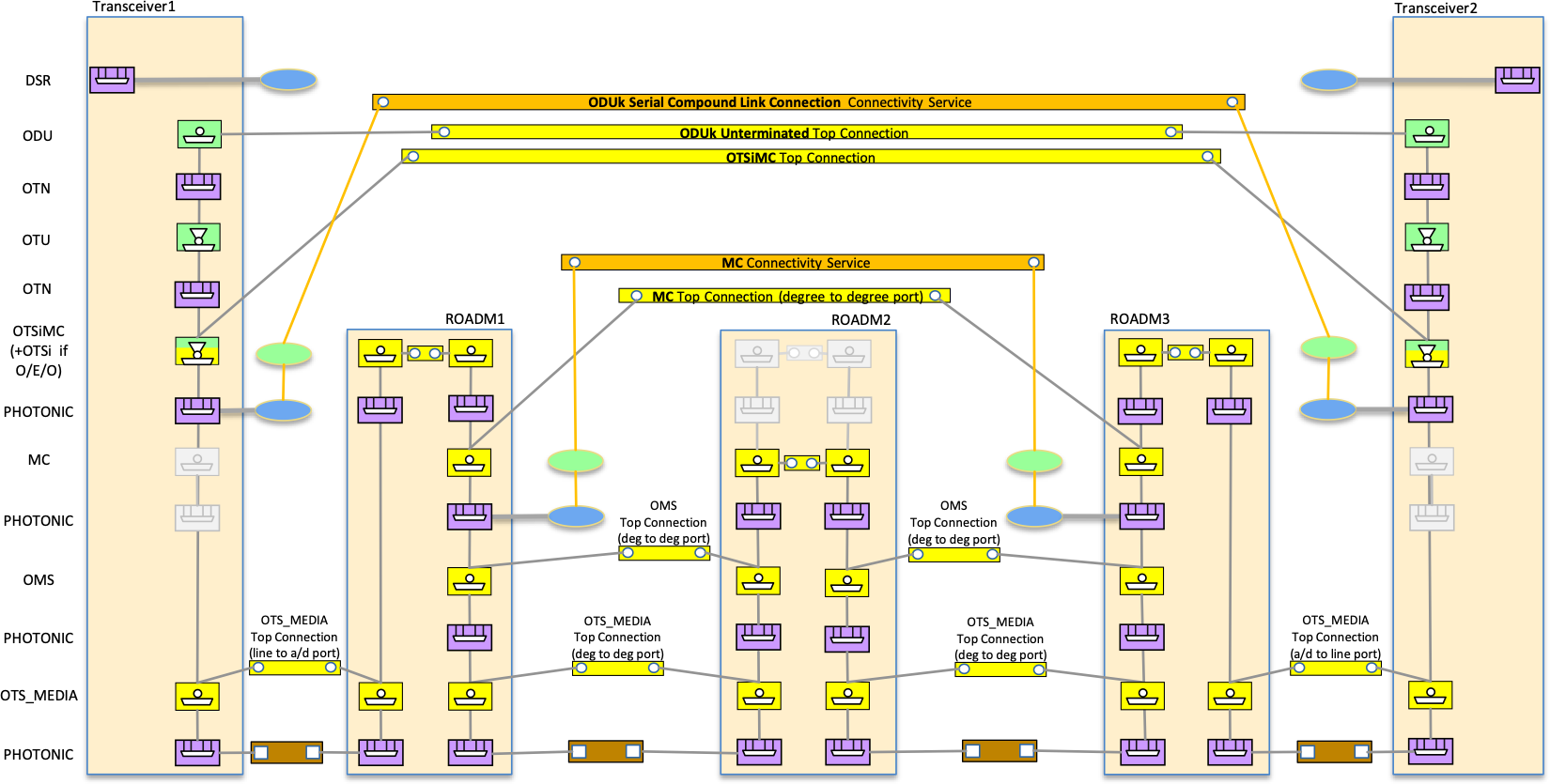 The OAM model has been refined to cover a broad range of OAM network scenarios and to simplify applications such as Network Connection Monitoring (NCM). The OAM use case coverage has been extended to include Provisioning of OAM jobs and Tandem monitoring. TR-547 provides rich detailed explanation of the OAM model usage. 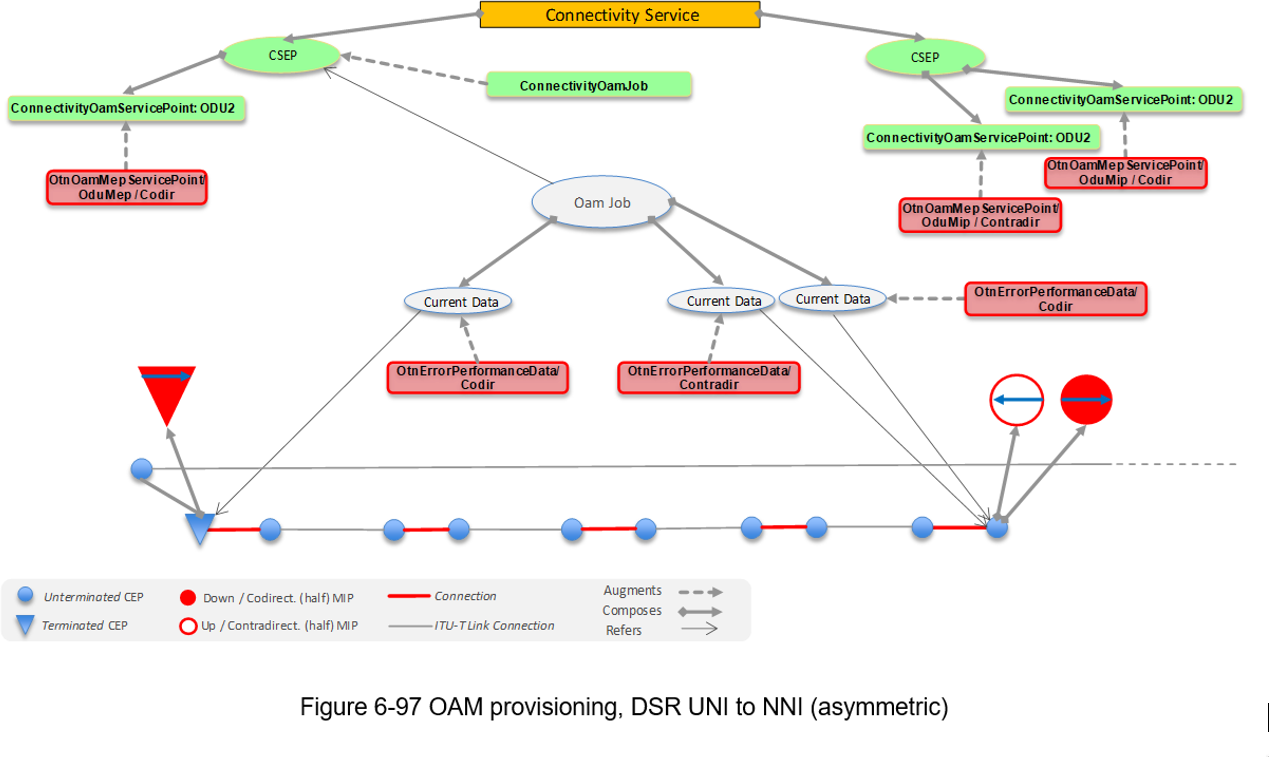 TR-547 v1.1 provided some description of control of integrated and partially disaggregated solutions. TR-547 v2.0 provides a far richer description of many more scenarios including details on the structure of the model for regenerated cases and also extensive examples of asymmetric cases (where the level of layer termination at one side of the network is less than that at the other side).

Consolidation of, and enhancement to, alarm and PM structures for notification and streaming

In TAPI v2.1.3 the notification solution and the streaming solution each used a distinctly different model for alarms/PMs.

Both tapi-streaming and tapi-notification reference a companion documents that provides normalized alarm definitions for use with this new model. 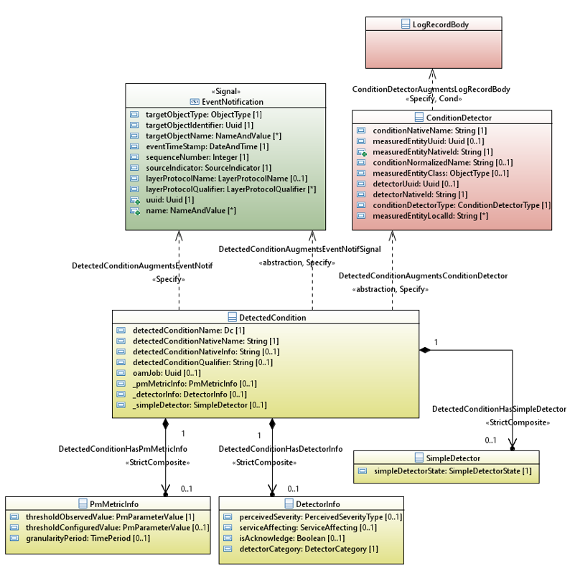 The solution now supports navigation via direct relationships from:

The server connection navigation removes the need for the connectivity-service to list all supporting top-level connections and bring significant improvements to model efficiency.

This new feature allows a client system to determine the equipments used to support a photonic connection as it passes through a device. This improves the opportunity for fault impact analysis and also better enables the operator to determine the impact on deployed connectivity-services of a planned equipment maintenance action. 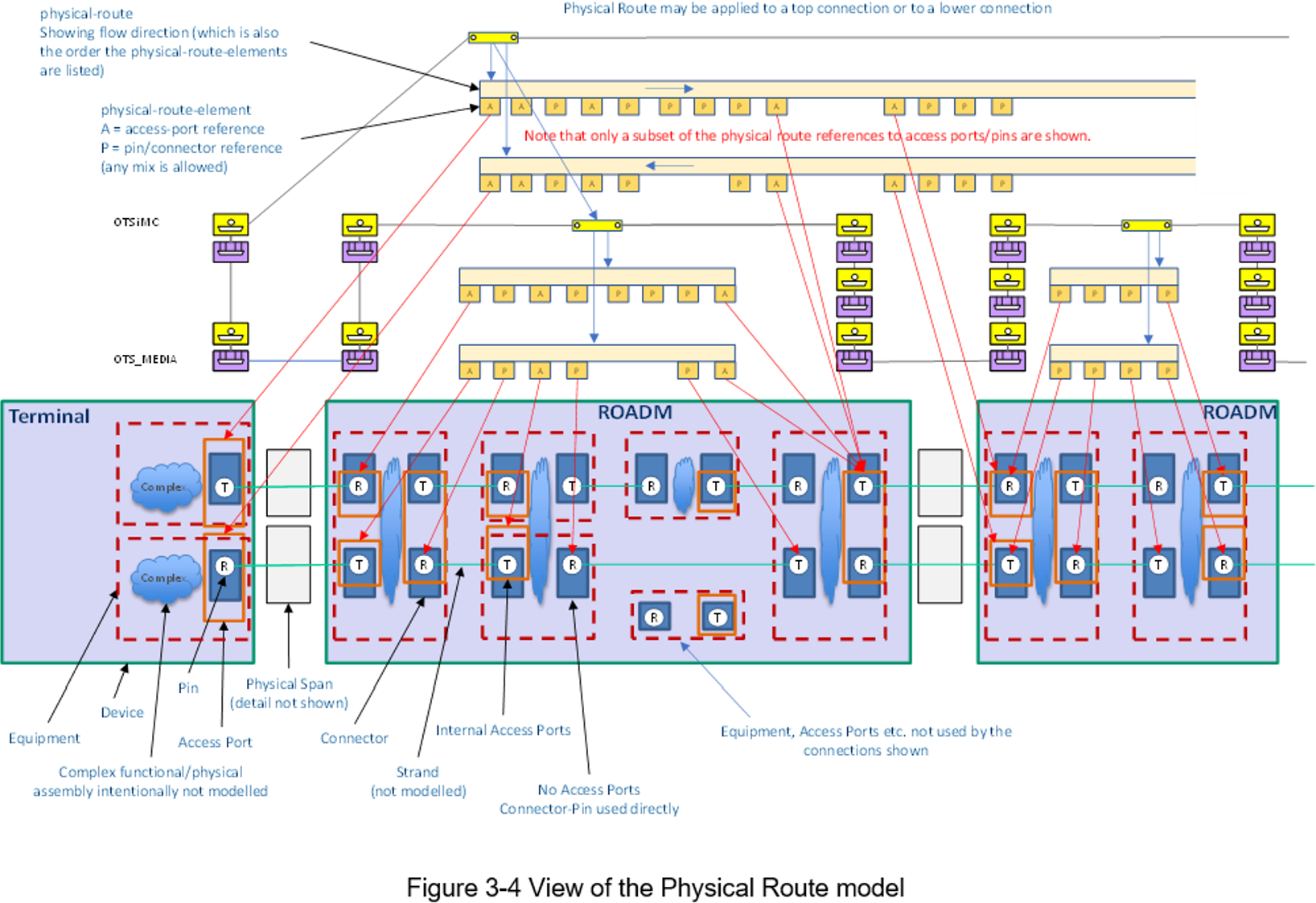 A general profile structure has been added that is used in various use cases to allow direction specific application of property values common across many instances. The profile may be augmented with application specific properties identified in technology specific models. 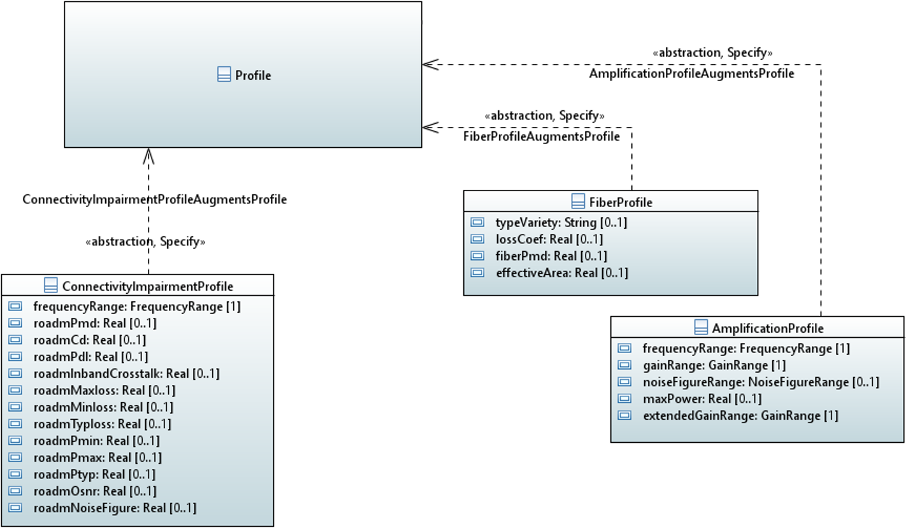 The relationship between the NEP and SIP has been clarified in TR-547 v2.0 and the representation of layer mapping opportunities has been enhanced via the supported and available payload structure properties. 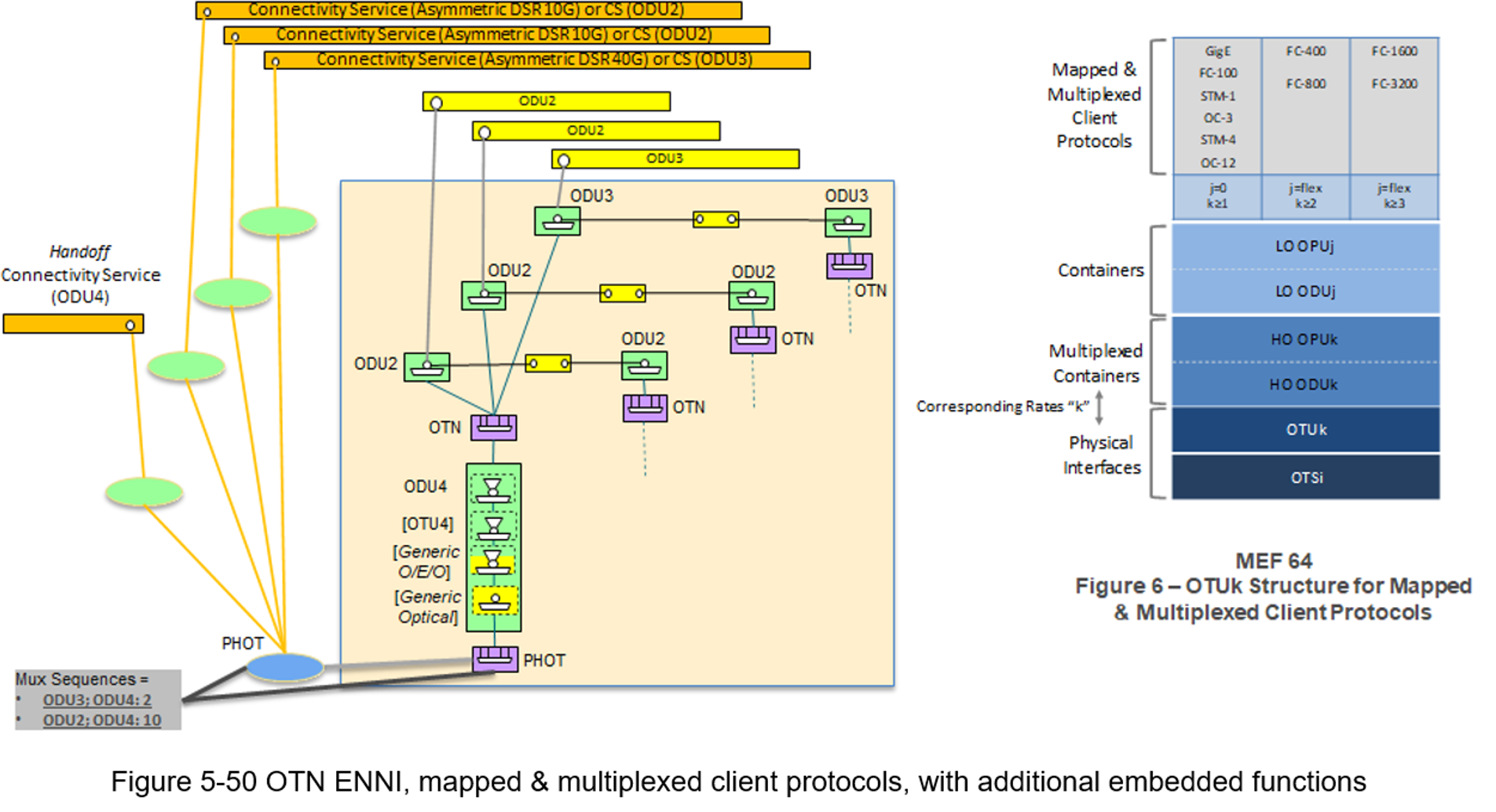 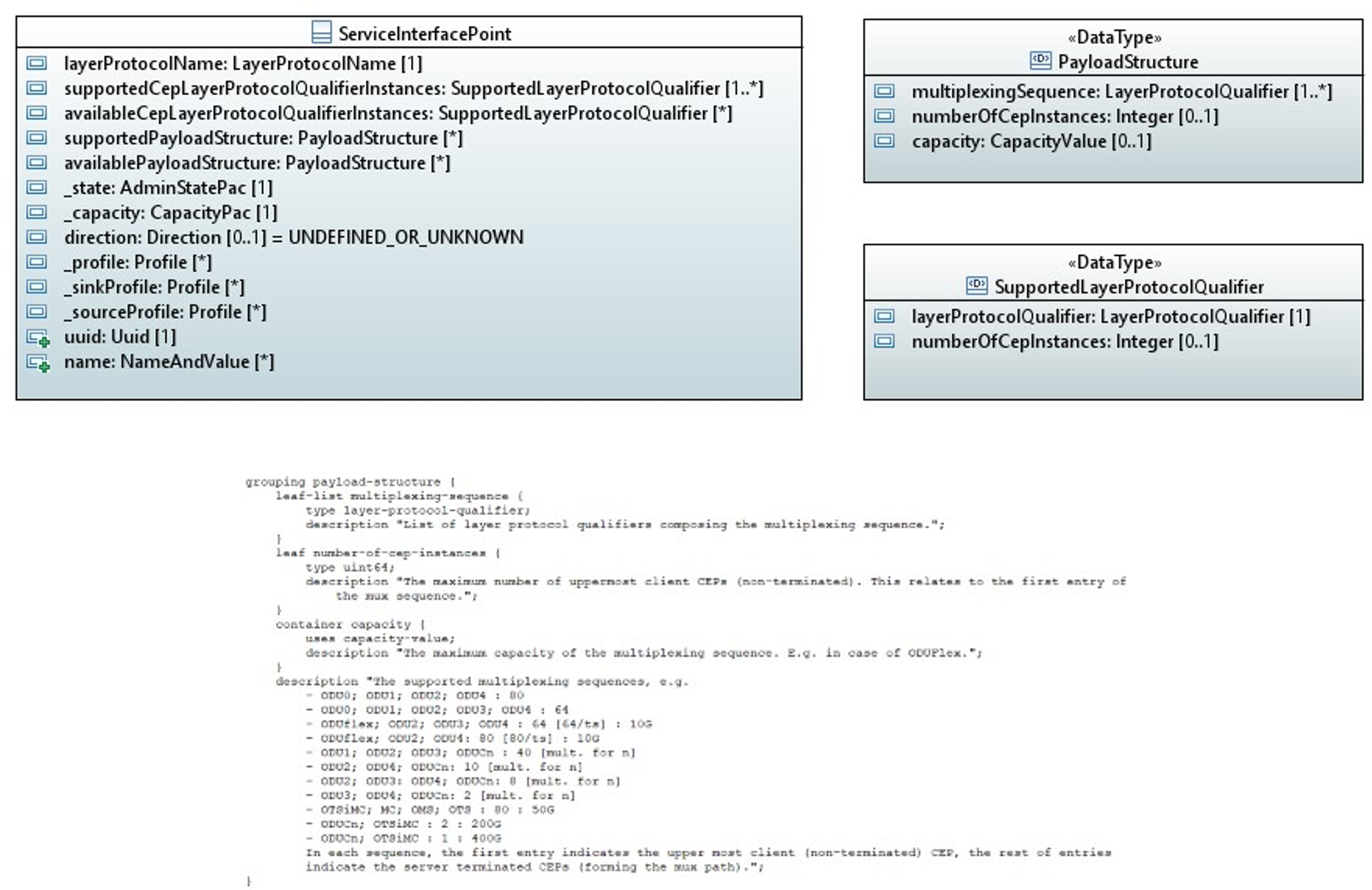 TAPI v2.1.3 provided opportunities to state constraints on the overall connectivity service but not on individual routes supporting that service.

TAPI V2.4.0 supports resiliency-route-constraint where there is an opportunity for multiple instances per connectivity-service. This allows the client to state constraints per priority route and hence guide the layout of each route. 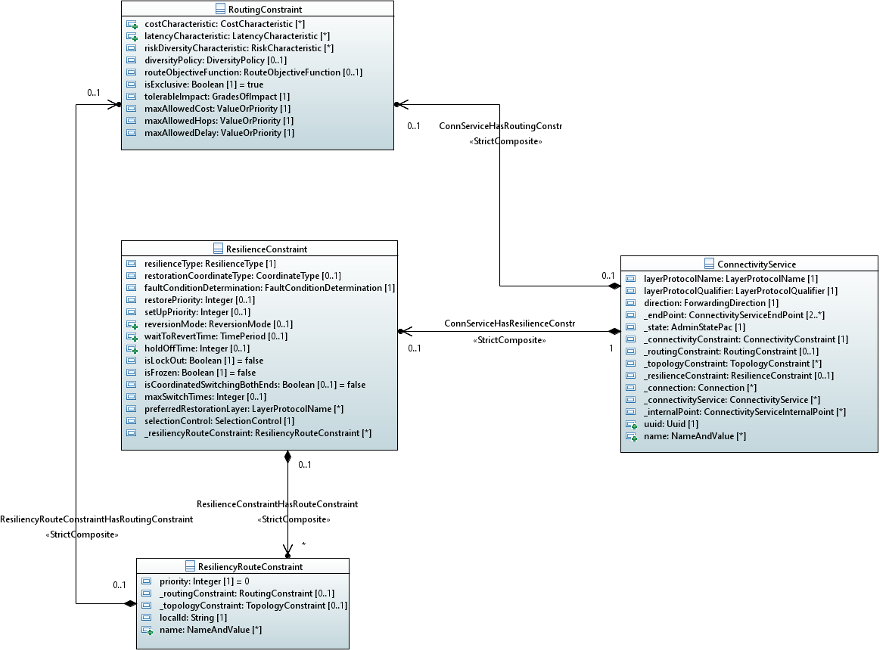 Expansion of UNI and ENNI models to cover key patterns

Many examples of provisioning scenarios explaining how to use the CSEPs, SIPs etc. at various points in the network illustrating several alternative UNI models with different degrees of simplification, enhanced ENNI structures and asymmetric network structures as well as structures including use of serial compound link connections. 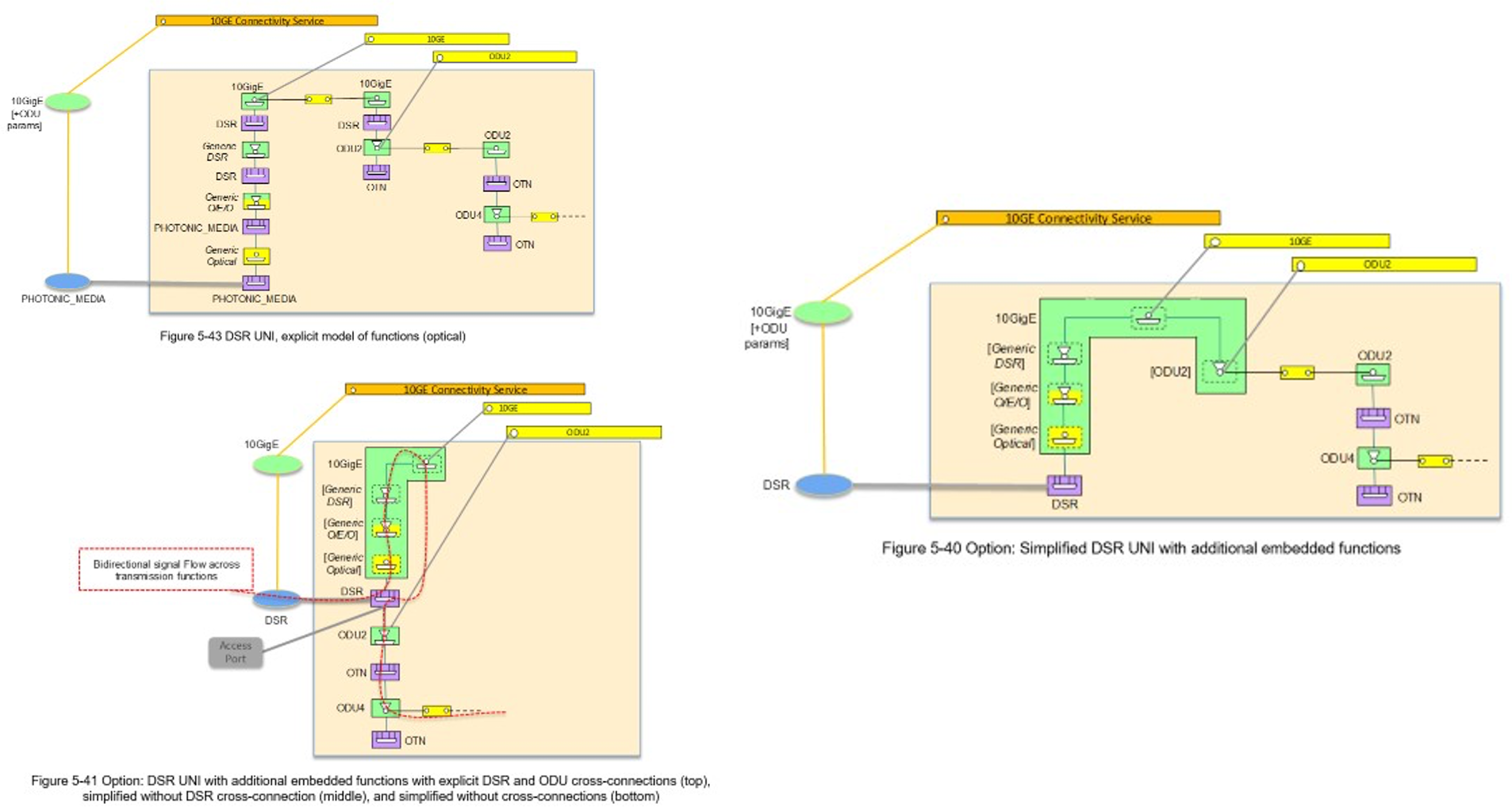 The definition in TAPI v2.1.3 TR-547 v1.1 provided a flexible approach to RESTCONF notifications but did not sufficiently guide/constrain the implementation. 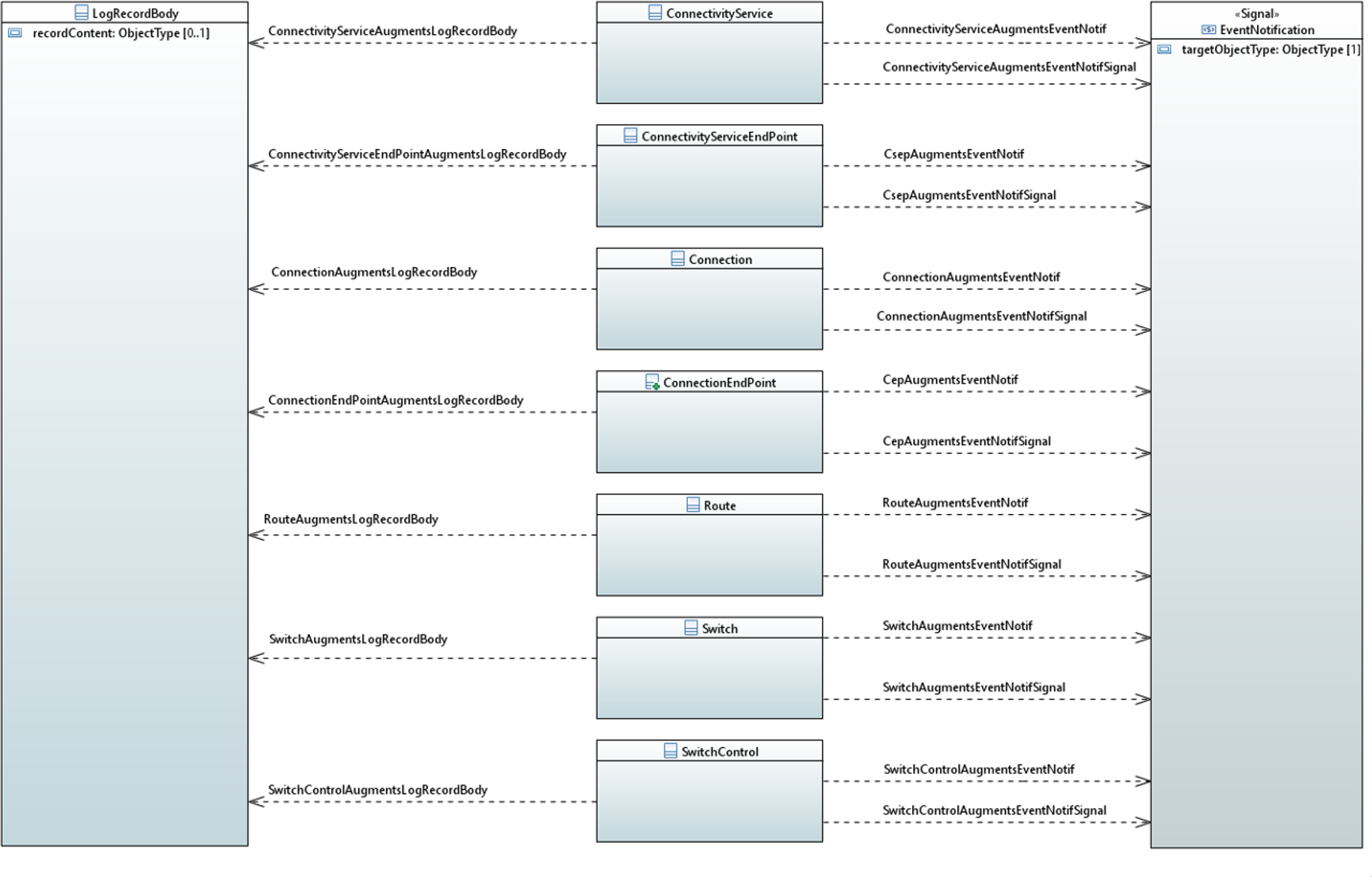 Media Channel provisioning has been enhanced to enable specification based on ITU-T n and m parameters as an alternative to explicit spectrum statements.

Some existing use cases have been adjusted to drive service provisioning from the DSR/ODU perspective as opposed to OTSi/OTSiA. For example, use case 1d in TR-547 v2.0 is now “DIGITAL_OTN with PHOTONIC_MEDIA/OTSi Service Provisioning” whereas in TR-547 v1.1 it was “Unconstrained PHOTONIC_MEDIA/OTSi Service Provisioning”. The essential outcome of the use case is the same, but the change of focus recognizes the purpose of the use case as opposed to the underlying realization.

TAPI v2.4.0 is available at https://github.com/OpenNetworkingFoundation/TAPI/releases/tag/v2.4.0.

Thanks for the many contributions over the years by team members, from previous and related activities and from other bodies such as TIP and OIF.

The ONF Transport API (TAPI) project charted under the ONF Open Transport Configuration & Control (OTCC) is responsible for the development of this SDK as an Open Source project.

TAPI is derived from the ONF Core model TR-512_v1.5_OnfCoreIm.

The TAPI project is an open community driven by contribution and collaboration between operators, vendors and other industry bodies.

TAPI is extensible to allow vendor proprietary features to be added as appropriate.

The previous widely deployed release of TAPI is TAPI v2.1.3 including:

Nigel Davis is a Systems Design Architect at Ciena and is a key innovator in multi-layer information modeling and standards.  He was recognized as a Ciena Technical Fellow in 2015 for his efforts within Ciena and in the industry.   Nigel has been active in the TeleManagement Forum, where he has been recognized as a Distinguished Fellow. He is now focusing on work in the Open Networking Foundation (ONF) where he co-leads the Open Information Model and Tooling (OIMT) project, is the editor of and a key contributor to the ONF Core Information Model, is an editor of and a key contributor to ONF Transport API (TAPI) specifications and is on the Technical Steering Team for the Open Networking Foundation (ONF) Open Transport Configuration and Control project. Nigel has several patents in the area of management and control. 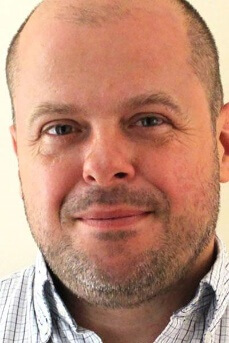 Ramon Casellas graduated in Telecommunications Engineering in 1999 both from UPC, Barcelona and ENST Paris, where he completed a PhD degree in 2002. After working as an Associate Professor (2002-2005) he joined CTTC in 2006, where he currently is a Research Director. He has participated in several R&D projects funded by EC, Spanish National Research programmes, and industrial contracts and published over 250 conference and journal papers in the field of Optical Networking. He has served as ONDM Program/General Chair (2018, 2020), and OFC2021 Program/General Chair (2021, 2023) and as JOCN Associate Editor. He has co-authored over 10 Internet Engineering Task Force (IETF) RFCs and drafts in the TEAS, PCE and CCAMP Working Groups. He is a contributor of the Open Networking Foundation (ONF) Open Transport Configuration & Control (OTCC) and a member of the Open Disaggregated Transport Networks (ODTN) project use case and software working groups. He has been an IEEE CommSoc and OFC short course instructor on the topic of SDN for Optical Networks. His research interest areas include GMPLS/PCE architecture, Software Defined Networking (SDN), Network Function Virtualization (NFV), Traffic Engineering and Distributed control schemes, with applications to Optical and Disaggregated Transport Networks. 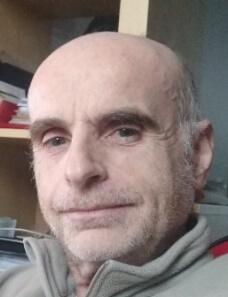 In this community member profile we highlight Gabriel Arrobo, a Research Scientist at Intel Labs, Intel Corporation. He is based in Hillsboro, Oregon and is an active contributor in the Aether comm