The Stratum thin switch OS is the industry’s leading open source switch operating system for data center white box switches supporting next-generation SDN interfaces, including P4, P4Runtime, gNMI and OpenConfig. Recently, thanks to the participation of our community, Stratum’s capabilities have been extended to support configuration and management of optical parameters including wavelength, modulation and optical power. These new capabilities enable Stratum to be deployed on the white box Cassini platform from TIP.

Cassini includes integrated Broadcom switching silicon and runs Stratum, which exposes P4Runtime and gNMI interfaces. Combining control and configuration capabilities from Layer 0 to Layer 4, Stratum controlled by ODTN can be deployed as a powerful platform for Data Center Interconnect (DCI) solutions, serving both as a spine for “leaf-spine” type architectures within the datacenter, and as a packet optical transponder for the inter-datacenter connections.

The ONF’s end-to-end stack will be demonstrated during live webinars with the combined set of ODTN and Trellis applications deployed on the ONOS control plane and controlling a leaf-spine topology in a 2-spine by 3-leaf configuration for the main data center and a 2 by 4 for the edge site. The two spines of each location are Cassini devices with line side optics connected back-to-back. 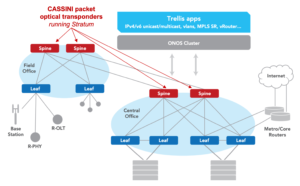 The four Cassini systems replace what would otherwise be 8 distinct devices: 4 spine switches and 4 packet optical transponder systems.  This converged design enables operators to deploy simpler solutions at a much lower cost, both in terms of Capex and Opex.

Learn More About ONF Solutions for DCI and Broadband Access

Please register to join one of the upcoming webinars, “ONF Open Source Solutions Enable Data Center Interconnect and Broadband Access”. It will feature a demonstration of ONF’s Stratum switch OS and an overview of some of the exciting new features of the latest Stratum release, including support for ONF’s Trellis and ODTN solutions. In addition, will also demonstrate the integration of ONF’s SEBA, a virtualized broadband access solution, and Stratum projects.

Note: The content of both webinars will be the same, so feel free to register for the webinar that is more convenient for you.

Credit to the Community

ONF would like to thank all the collaborators that contributed to putting this solution together. PLVision contributed Stratum code to support TAI and expose new optical paths via gNMI. Edgecore and Lumentum contributed Cassini hardware and the ACO pluggable transceivers, and NTT electronics performed integration for TAI support in Stratum.

“NTT Electronics America is pleased to have been able to contribute towards bringing together and enhancing the ONF’s ODTN and Stratum projects on Cassini hardware.  We see this as a powerful step forward toward making available open source optical transport solutions for operators.” Wataru Ishida, Field Applications Engineer for NTT Electronics America, Inc.

“Edgecore Networks is very pleased to see the open community effort that has formed around creating an ecosystem for the Edgecore’s Cassini Packet Transponder.  Emergence of a complete open source stack for a Data Center Interconnect (DCI) solution based on ONF software components, including Stratum and Edgecore’s Cassini hardware is a major step forward for the industry,” George Tchaparian, President & CEO, for Edgecore Networks.

“The ODTN can be considered an attempt to push SDN principles out of a familiar data center environment and apply them to wide area networks. Leveraging our solid expertise in open NOS integration, we are happy to join efforts with ONF to empower Stratum in bringing SDN advantages to optical equipment vendors.” Leonid Khedyk, CTO for PLVision